Home price growth has begun to slow down, with values falling across the country in May according to the latest data from CoreLogic.

Adelaide was the top-performed market in the country once again, seeing values increase 1.8%, followed by Brisbane at 0.8%. The smaller cities are still rising, however, their growth was not enough to offset falls in Sydney and Melbourne.

Sydney has been recording progressively larger monthly value declines since February, while Melbourne has fallen across four of the past six months.

CoreLogic’s Research Director Tim Lawless said despite the 0.5% rise in housing values across Australia’s combined regional areas, it was not enough to keep the national index in positive monthly territory.

“There’s been significant speculation around the impact of rising interest rates on the property market and last month’s increase to the cash rate is only one factor causing growth in housing prices to slow or reverse,” Mr Lawless said.

“It is important to remember housing market conditions have been weakening over the past year, at least at a macro level.”

Mr Lawless noted the quarterly rate of growth in national dwelling values peaked in May 2021, shortly after a peak in consumer sentiment and a trend towards higher fixed mortgage rates.

“Since then, housing has been getting more unaffordable, households have become increasingly sensitive to higher interest rates as debt levels increased, savings have reduced and lending conditions have tightened,” he said.

“Now we are also seeing high inflation and a higher cost of debt flowing through to less housing demand.”

Regional Australia has also come off peak growth rates, Mr Lawless said, with the annual growth trend easing to 22.1%, down from its January peak of 26.1% and likely to trend lower through the rest of the year.

“Considering we are already seeing the pace of growth easing across most regional markets, it is likely we will see growth conditions softening in line with higher interest rates and worsening affordability pressures,” he said.

“Arguably some regional markets will be somewhat insulated from a material downturn in housing values due to an ongoing imbalance between supply and demand as we continue to see advertised stock levels remain extraordinarily low across regional Australia.”

Sydney and Melbourne have been seeing a surge in new listings, while across the country advertised stock levels remain -10.3% below levels seen this time last year and -28.4% below the previous five year average.

In Sydney and Melbourne listings are now higher than 12 months ago and against the five-year average.

“With stock levels now higher than normal across Australia’s two largest cities, buyers are back in the driver’s seat,” Mr Lawless said.

“Vendors in Sydney and Melbourne have faced lower auction clearance rates since mid-April and those selling via private treaty are taking longer to sell with higher rates of discounting.”

Outside of Sydney and Melbourne, stock levels remain below average, especially in the cities where housing values are rising the fastest: Adelaide (-39.5%), Brisbane (-38.2%) and Perth (-34.7%) all have advertised stock well below the five-year average.

Along with rising listings, sales numbers are also starting to slow down according to Mr Lawless.

“Our estimate of home sales nationally over the three months to May is -19.2% below the same period a year ago, but still 12.1% above the five year average,” he said.

“More recently, demand has been boosted by international arrivals returning to the rental market.”

As interest rates normalise over the next 12 to 18 months, the expectation is most of Australia’s capital cities will move into a period of decline brought about by less demand.

With the housing debt to household income ratio at record highs, household balance sheets are likely to be more sensitive to rising interest rates.

“With the RBA set to steadily raise the cash rate through the rest of the year and into 2023, we are likely to see falls in housing values become more widespread as mortgage rates trend higher,” Mr Lawless said.

However, there are a number of mitigating factors that will help support housing including a tightening labour market that is putting upward pressure on rents, the return of international migration, as well as the fact that mortgage stress should also be minimised to some extent by mortgage serviceability assessments according to Mr Lawless.

House prices across the country have continued their strong run of increases closing the financial year 13.5% higher.

After widespread talk of doom and gloom in early 2020 on the back of widespread lockdowns, house prices across the country have clearly proven the so-called experts wrong.

The latest data from CoreLogic showed that dwelling values across the nation rose 1.9% in June marking yet another strong month for property prices.

Once again, much of the strength came from the upper end of the market with Sydney house prices growing by 2.6%, adding to what is now an 8.2% in three months. Hobart was the other strong performer last month, seeing a 3.0% increase in house prices. 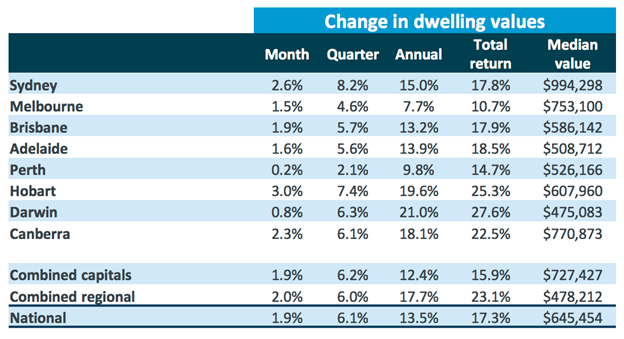 All of the major capital cities and regional areas increased in price last month, marking an impressive year around the country.

In the last 12 months, Darwin house prices bounced back from a long period of decline recording a gain of 21% making it the strongest market in the country. While Canberra and Hobart both gained, 18.1% and 19.6% respectively over that same period of time.

While it appears that the momentum is starting to slow down in certain areas and segments of the property market we’re still seeing a clear move towards houses over units - particularly at the higher end.

Notably, house prices in Sydney are up 19.3% over the past 12 months compared to a rise of just 8.7% for units. The trend is similar across all the capital cities as well as homebuyers look for more space, with many attempting to work from home and forced to endure long periods of lockdown - especially in Victoria and NSW. 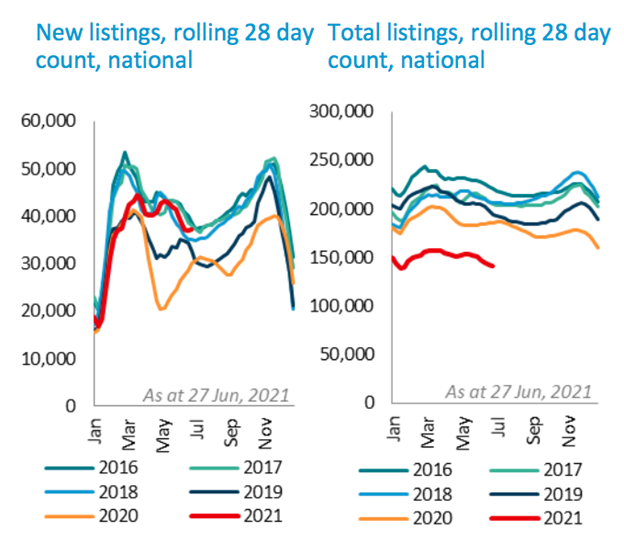 Head of Research at CoreLogic, Eliza Owens, believes that there are still plenty of fundamental factors driving the market at this time.

“Before the recent uncertainty of growing COVID-19 case numbers, there were plenty of demand-side factors driving housing market growth through the first half of 2021.”

“In May, the unemployment rate fell to 5.1%, and the underutilisation rate fell to 12.5%, the lowest level since February 2013. Consumer confidence remained elevated through June, although down from the recent April highs. Elevated savings accumulated through COVID-restrictions last year, along with a more confident consumer sector, has encouraged consumption of larger goods, such as housing.”

“This has all occurred against a backdrop of continued low mortgage rates, which is one of the most significant demand drivers.”

While price growth might be slowing down in some areas, Ms Owens believes that low stock levels will continue to keep house prices buoyant.

“The latest listings count from CoreLogic indicates that in the 28 days to June 27th, total advertised stock remained 24.4% below the five-year average. This dynamic of strong consumer demand, and low housing supply, continues to create some urgency among buyers.”

New listings have risen alongside prices, but total stock on the market remains low. CoreLogic estimates that there were approximately 126,320 fresh listings advertised for sale in the three months to June, 7.9% above the previous five-year average for the June quarter. However, in the same period, there were 167,450 sales nationally. This shows there was more than one sale for every new listing added to the market.

While the last 12 months have been incredibly strong with the housing market showing just how resilient it truly is, it’s clear that momentum is slowing.

CoreLogic notes, that with high house pieces and the continued impact of lockdowns on transactions and on employment, it will be difficult to sustain the current level of house price growth.

Looking forward, with looming rises in interest rates and affordability issues still a factor, while house prices will still likely continue to grow, it’s unlikely that they will be able to maintain the current momentum headed into 2022.

To choose just five property marketing trends wasn’t easy. We could have given you any number with the potential to shape real estate marketing.

However, the trends you’re about have been prevalent across Australia, New Zealand and the rest of the world in the last 12 months.